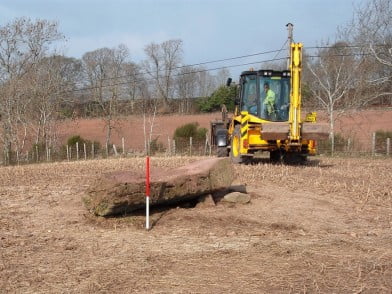 The Scheduled Monument of Carlinwell Standing Stone fell over in January 2010. Historic Scotland commissioned the investigation of the socket and the stone’s re-erection. A trench measuring 2m by 2m was excavated, centred on the stone’s socket.

Two pits containing inverted Collared Urns with cremations were found. The standing stone socket was found to be oval in plan and measured 1.1m by 0.8m, with a re-cut on the south side containing large packing stones, possibly in an attempt to prevent the stone from toppling as the stone had a significant lean to the south.

The excavation at the base of the Carlinwell standing stone, despite being a small area, revealed not only the socket and secondary packing stones for the stone but also two urned cremation burials dating to the first millennium BC and contained within Collared Urns. The larger, decorated vessel contained the remains of a young adult, probably male, along a possible single-hole whistle and part of a pin, a quartz pebble, and was probably also associated with three lithics, including a thumbnail scraper. Bone from this cremation was dated to 1916-1749 BC (calibrated at 2-sigma). The smaller urn was plain and contained the remains of a 6 month old infant along with a tubular bone bead and a decorated pendant or toggle.

The discovery of a bone single-hole whistle is an especially significant discovery, being only the second such find in Scotland and one of only five (possibly six) Early Bronze Age examples in the UK. The decorated bone pendant is also an interesting find, with no direct parallels presently forthcoming although it fits into the Early Bronze Age tradition of bead and pendant manufacture which can often be found associated with Collared Urns.