Roman skulls find is a first for Scotland 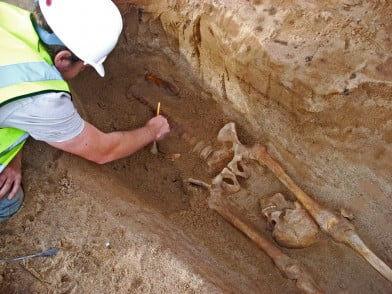 Archaeologists excavating the site of Musselburgh’s new primary care centre have unearthed human skeletons dating back to the Iron Age.

The remains of decapitated bodies – the first of their kind to be found in Scotland – were uncovered along with the ramparts of a Roman fortlet.

The discovery of the burial site, containing both Iron Age and Roman skeletons, is deemed to be of national importance, shedding new light on early settlements around the Roman fort at nearby Inveresk Village.

Project manager Bruce Glendinning of CFA Archaeology said it was the skulls of the Roman skeletons that made the latest find unique.

“Some of the skeletons have been buried with their heads chopped off, for some unknown reason. This appears to have happened after they died, in some sort of burial ritual,” he told the News.

“We know of decapitated Romans found in York – thought to have been gladiators – but there have been none found in Scotland that we know of.”

The 10 or more skeletons, all believed to be male, have been removed to laboratories, where scientists are now studying their age and origins.

They will eventually be destined for the archives of the National Museum of Scotland, where they will be kept for future study.