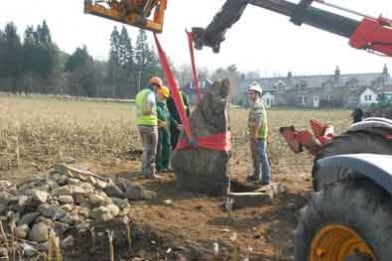 Pitfourie Standing Stone, known as The Dane’s Stone or Dane Stone, is a standing stone of late Neolithic or Bronze Age date located in a field to the north of Moulin, Pitlochry.

During February 2014 local residents reported to Historic Scotland that the stone had fallen over. This was caused by a combination of ground level reduction by centuries of agriculture and recent waterlogging of the ground. CFA Archaeology along with stonemasons Stockdale and Lyall carried out the reinstatement.

CFA excavated a trench around the socket to investigate and record the stone’s setting. The natural subsoil is loose in character so the recorded profile of the socket is only broadly representative of the original. A possible whetstone was found but remains undated.

Stockdale and Lyall installed a reinforced concrete base around the socket for stability. The stone was then lowered into the socket using telehandlers. After the alignment was checked, the original packing stones were replaced to hold the stone upright. The stone is now set c.0.25m lower in the ground and is more upright than when it fell. This likely reflects its original depth and attitude more accurately than the position it had adopted prior to its collapse.