CFA have recently finished extensive excavations at the site of new university student accommodation just off Holyrood Road in Edinburgh. CFA have been working closely with the contractors Balfour Beatty since May 2013 to ensure important archaeological remains were fully recorded and recovered before construction work. The excavation has uncovered a wide range of significant remains which will shed a great deal of light on the medieval and later history of the area. Due to the nature of the site, archaeological excavation could not commence until the construction phase commenced. To prevent any delays to the construction programme a detailed programme of work was developed to fit in with the construction phases. This allowed for often extensive archaeological excavation to take place prior to construction within each phased area. A policy of preservation in situ was also agreed with the Council Archaeologist which saw some of the deeper deposits preserved beneath the buildings.

The site was located on the corner of St John’s Road and Holyrood Road and occupied what were once the medieval backlands of the south-west corner of the historic burgh of Canongate; the burgh got its name from the Canons of Holyrood Abbey, which was established in 1128. The backlands typically formed areas to the rear of the houses which would have been used for industrial purposes and later on for gardens. In the 19th century and up in to the 20th century the area was occupied by the Edinburgh & Leith Brewery before being redeveloped in the 1970’s for Edinburgh University. Crucially the brewery and the later University development did not succeed in destroying all of the earlier remains which survived in pockets across the site.

Once the University buildings were removed the latest remains of interest were those of the Brewery. These consisted mainly of the foundations of the buildings that once formed the Brewery. In the main these were built of mortared sandstone but because of the level of demolition, often only the foundations of walls survived, ascribing functions to most the surviving remains will prove difficult. A number of Wells also belonging to the brewery were identified. Most of these wells were still active and one of these was over 12m deep and cut in to the natural bedrock. 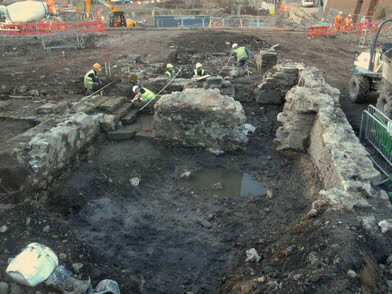 Below the brewery remains were deep deposits of mostly homogeneous garden soils. These soils derived from the areas use as gardens and orchards. Map evidence and evidence from elsewhere along Holyrood Road indicates that this type of use for the backlands probably stretches back as far as the 15th Century. So it is likely that this form of landuse could have run from then until the 19th century when the Brewery was built. The garden soils contained a rich mix of finds including pottery, animal bone, and in the upper levels clay pipe bowls and stems. This mix of finds is probably indicative of manuring.

Sealed beneath the garden soils were earlier, probably c.12th – c.14th century remains. One of the most important discoveries was the possible remains of the medieval burgh boundary, surviving as a large ditch and a possible bank which would have marked the edge of the medieval Canongate. The ditch appeared to have mostly silted up naturally but it also contained quantities of ceramics and animal bone, especially horn cores. In places the surface of the ditch was covered in stones suggesting that when filled up it was wet and soft and that the area needed firming up with stones to allow people to cross it without sinking in to the mud. 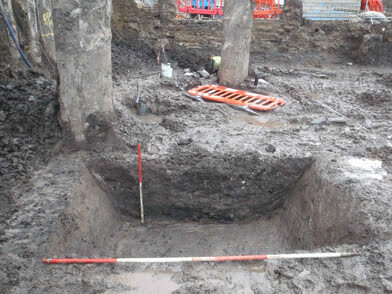 Other remains mostly related to the industrial processes taking place on the site in the medieval period. Along the most southerly edge of the site features associated with the tanning of animal hides were identified. A large stone lined tanning tank almost identical to those found on the earlier Scottish Parliament excavations was identified. This had been sealed with clay when it went out of use creating an anoxic environment which had preserved leather off-cuts and animal hairs. 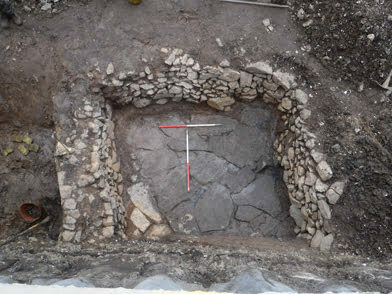 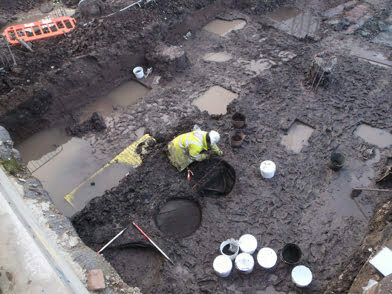 Tanning was a toxic and smelly process so the location of the remains at the far end of the backlands away from the houses on the Canongate comes as no surprise. They also lay close to the road which leads from the ‘Cowgate’, named for its cattle markets, from where the animal hides would probably have been obtained.

Overall a wide range of medieval and later pottery and exceptionally well preserved animal bone was recovered. The cleaning of these finds is underway to allow the post-excavation requirements to be agreed. However, it will be some time before the analysis and publication is complete. Once complete this work should add significantly to our knowledge of this area and will add to the information recovered on the Scottish Parliament Excavation and the excavation that was undertaken adjacent to Ried’s Close both of which were located further to the East along Holyrood Road. 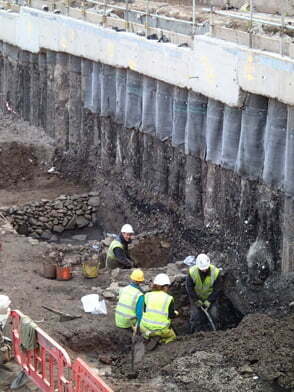