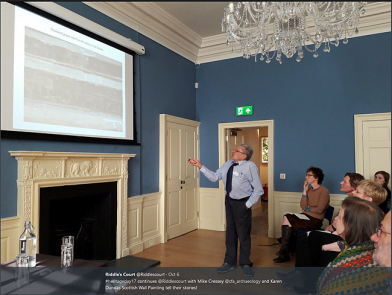 Following the official opening of the new Patrick Geddes Centre at Riddle’s Court by HRH the Duke of Rothesay on 8 September 2017, CFA was involved in the first Teaching Day on Friday 6th October. Dr Mike Cressey (CFA Archaeology) and two other members of the original design team gave a presentation to 25 masters students of the one year architecture and design course at University of Edinburgh.

In his presentation on the anatomy of Riddle’s Court, Mike Cressey provided students with the methods of rapid and detailed building recording as well as a review of the results of nearly three years of building recording and analysis.  The results include the largest collection of painted Renaissance painted beam and board ceilings recorded in the context of the Royal Mile, a magnificent kitchen fireplace with bread oven and salt press as well as a large collection of dated Scandinavian oak timbers.

Having students and the general public alongside each other would have pleased Patrick Geddes, the so-called father of modern planning. In the late 19th century he fostered the notion of ‘town and gown’ providing the first University of Edinburgh halls of residence whilst renting out rooms to the local people of various trades and status. As Geddes orginally intended, teaching will be a major part of the Patrick Geddes Centre and CFA Archaeology were proud to have been involved from the outset.