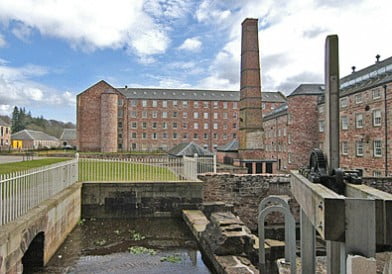 Stanley Mills is a unique complex of Grade A listed water-powered cotton mills situated on a majestic site within a bend in the River Tay. Water-power was used on the site from 1729, when a tunnel was driven through the peninsula to power a corn mill, until 1965 when the mills were finally connected to the National Grid. The lade system and water-wheel pits remain largely intact and have been the subject of renovation. The six-storey East Mill and four-storey Mid Mill were built of local sandstone around 1800 and were subsequently altered and extended as a result of fire damage and changing accommodation needs. The brick-built Bell Mill was completed in 1787 to the design of Sir Richard Arkwright, inventor of the water-powered spinning process and pioneer of the factory production system. 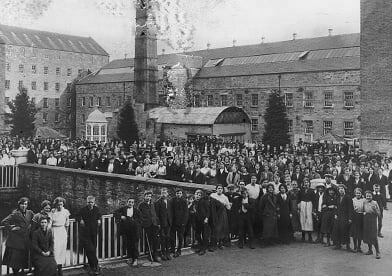 A programme of standing building recording, trial trenching evaluation and archaeological watching briefs have been carried out as part of on-going renovation works. In the autumn of 2005 CFA carried out a standing building survey on a disused carding shed of 1930s date prior to its demolition. The carding shed was situated on the west side of the 18th-century Bell Mill and occupied the site of a water-mill of the same period. The foundations of this feature were uncovered in July 2006 and were found to be largely intact. The mill foundations had foundations surviving to a depth of 1.5m and its gable at the west end had a double wall that would have supported a water wheel. A nearby lade provided power to the wheel. During the course of the excavation several complete mill wheels were found. Some had been re-used in the carding shed foundations. In other areas of the interior of the mill a wide assortment of architectural features have been recorded as the refurbishment has progressed. In November 2006 CFA recorded the fire-proof vaulted ceilings and cast-iron structural beams within the Mid Mill that were exposed during the insertion of a new lift shaft. This work is allowing a new insight into how each successive floor level was built and the techniques involved in the fabrication of the ironwork.